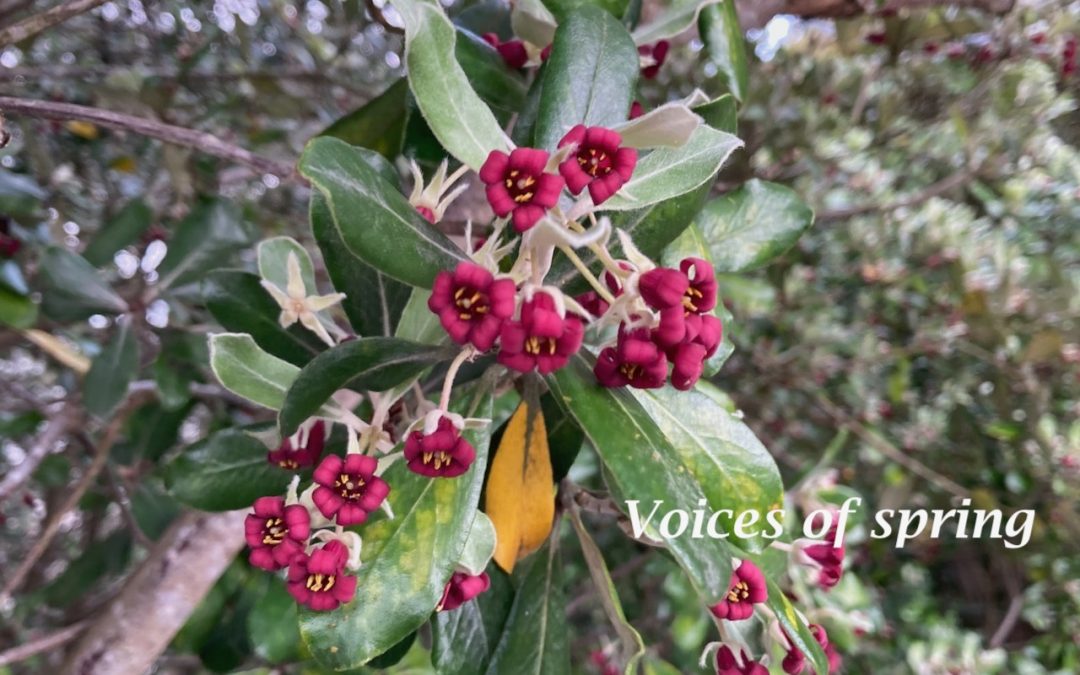 Over the years that I’ve been writing these newsletters I’ve never had to think, ‘What shall I write?’

But this time I did find myself wondering, because my mind has been elsewhere during Auckland’s weeks of lockdown. I’ve dropped into the stillness of retreat, happily immersed in a new writing project.

What is it about?

It’s too soon to tell you the details, but what I can say is, that after writing three books on the seasons of nature I am now turning to the seasons of life.

So I wondered, ‘What shall I write for spring equinox, this wild season midway between winter solstice and summer solstice?’

Last night in meditation an answer came, like a flash of soft lightening. Nature itself will write the newsletter. The trees and birds have something to say. They want to speak to you. Whether you live in the northern or southern hemisphere, their messages are for you.

So here are their voices.

[You will see a photo of this tree in the heading of the newsletter.]

The karo does this by moving flexibly, allowing itself to be shaken vigorously and yet holding its flowers so they will not fall. Every petal is held and survives to be fertilised, to make its round furry seedpod which will split open and spread widely, and grow into new trees.

‘You too can practice agility. Keep moving, keep adapting. It is the rigid branches that snap in the wind, not the ones that shake fearlessly. Be like us.’ 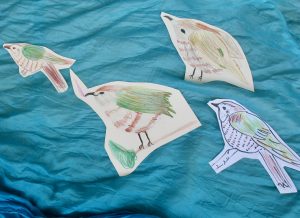 The cuckoos and kuaka, birds of the long journeys, are on their way back from the north. They are returning to their spring nesting grounds.

They say, ‘Don’t be afraid if your journeys are long and arduous. Keep flying, and hold faith. Your inner radar will show you the way, just as it does for us. You will arrive and find your safe place once more, to settle and nest.’ 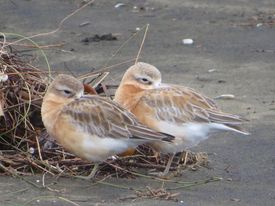 These birds with the name that seems to flutter as you say it, will soon be preparing their nests out in the open on beaches and river banks. Once there was no danger but now people have brought animals that kill the vulnerable chicks.

The tūturiwhatu say they have seen many of their young killed by dogs and sometimes it feels hopeless to continue breeding.

However, in many places, humans are now helping by creating protective walls of kelp that also contain food in the form of tiny insects, and by keeping dogs under control. They watch closely as once again the birds lay their eggs and hatch out tiny chicks.

Some are surviving and some populations are showing a small increase. The tūturiwhatu want you to know they are grateful.

They say, ‘Keep observing nature. Observe closely and regularly and you will know how to help.’ 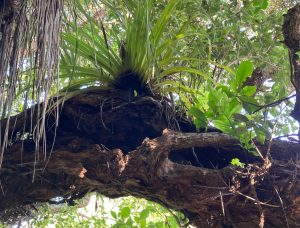 These are the grandmother trees. Many times in their lives they have fallen over. Whole branches have collapsed onto the ground. But they have developed a trick of putting down roots from their fallen limbs and then sending up new twigs and leaves from the horizontal branches.

They sprawl, cling to cliffs, fall, lose limbs and then grow some more. They say,  ’Old and gnarled we may be, but we are survivors, just like you who learn to sprout new life from old wounds.’

Blessings to you all at Equinox, whether you are in autumn or spring.

I offer thanks to the voices of nature.

May we all keep listening.

If you’d like to see the video of the karo being shaken in the spring winds, you’ll find it on my Facebook page.

For guidance in celebrating spring equinox, my seasons’ books are there to help you.
Dancing with the Seasons is a personal guide to the seasonal flow.
Celebrating the Southern Seasons is the classic resource book.
Sun, Moon, and Stars will give you inspiration for celebrating with your family or whānau.