Tomatoes across the world 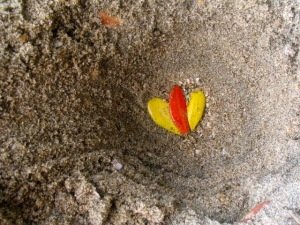 This post was created in my mind over a month ago. It’s been gestating slowly. I’ve always used only my own photos on this blog, but today I break the rules, and you will see why. 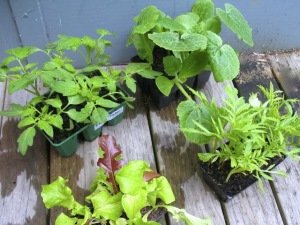 It began when in the same week I read two posts from favourite blogging friends. Both mentioned the same thing: gathering in the very last of the tomatoes.
Celi writes a daily blog about self-sufficient organic farming on the prairies of USA. She works hard, has a lively imagination and writing style, and a great sense of humour. On October 19 she put up a post called Peahens on the catwalk kitten in the garden, in which she posted this photo: 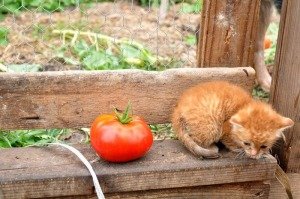 and wrote:
bringing in as much produce as is left in the gardens, tonight it is meant to freeze down to 35F (1.6C) so it is a race against time. Who knows if the tomatoes will survive that anyway. 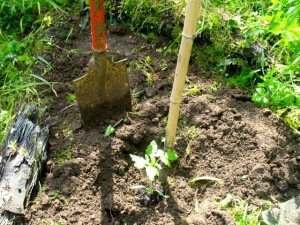 Now it was only a week earlier that I had planted the first tomato seedlings out at the bach. And in the same week discovered an accidental tomato plant, which had popped up beside the spinach in a pot on the balcony in town. 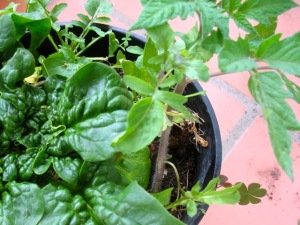 Only two days after Celi’s post, I discovered Penny had posted on exactly the same subject. Her blog is about life on the Cutoff, a block of land in the midwest USA, visited by deer, grandchildren, books and whatever Penny’s roaming imagination calls in. Penny tends a community garden, and in her post ‘Soups and Shawls and Bittersweet’, she included this picture of her last harvest: 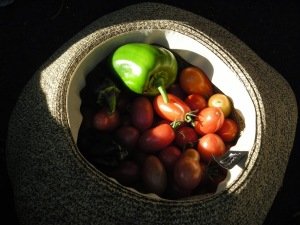 She wrote how it was a good time of year to take stock:
It is also time to clear out our plot . . . I harvested a good hat full of tomatoes last week, and Tom and I gathered more this weekend. Soon, very soon, the plants will be pulled and composted, the fencing will come down, and we will sigh a good sigh at the fruits we reaped from our efforts as well as the sense of community that prevailed. 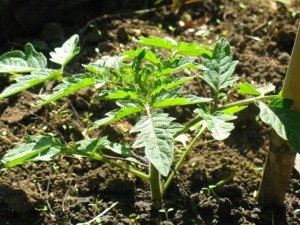 Meanwhile my little tomatoes at the bach were growing fast. I took this photo on the same day that Celi brought in her harvest. That week, the accidental tomato on my balcony in town surprised me by bursting into tiny yellow flowers.
Now my blogging friends are hunkering down while the snow falls, the cold winds blast and the mercury plunges to the kind of lows that we never experience here in Auckland. 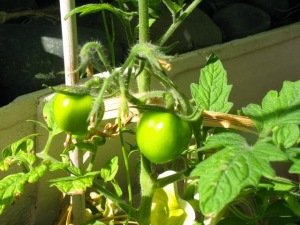 Here, we are now fruiting and expanding. There, they are drawing in. 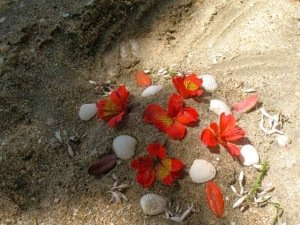 For several decades I’ve been writing about the seasons. (dev.julietbatten.co.nz/books). My mission was to establish, very firmly, a seasonal calendar for the southern hemisphere. I wanted people to wake up to where they were living, to take charge of the fact that Christmas, for example, is a winter solstice festival. We don’t have to spray snow everywhere in the heat of summer, pretending we live in the north. We can embrace our own seasons, bring in our own symbols, celebrate with pohutukawa and picnics, on beaches and balconies, with sun and sand.

This work kept me very focussed on the seasons of the southern hemisphere. My blogging friends from the north, who are so connected with the rhythm of the land in their hemisphere, have stretched my awareness back to include the whole planet. Autumn and spring, winter and summer: these are the polarities that we find ourselves in as one human family.
Now, whenever I celebrate our seasons of Aotearoa New Zealand, in the other half of my mind I am remembering my friends who are in the opposite time.
We are one family.
We share tomatoes across the world.
*Thank you Celi and Penny for being happy for me to share your images and words here.