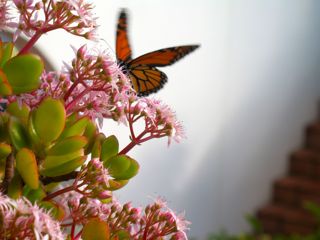 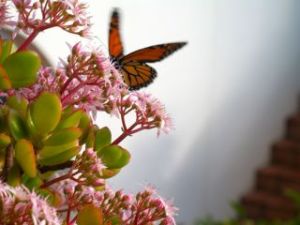 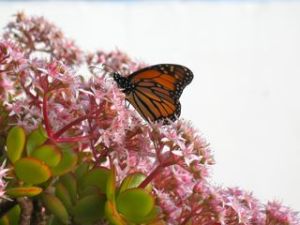 flitting around from one flower to the next with such grace, like a messenger from other realms, telling of colour, lightness and freedom. 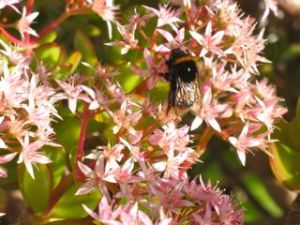 And then another visitor arrived. I was excited to see it, and I’ll tell you why. Two years ago the jade bush was covered with bumble bees. I did a post about it, and gave the background to the disappearance of the bumble bee in Britain, and the failed attempt to send crates of hibernating bees from New Zealand. You will find the post on http://www.julietbatten.co.nz/getting-close-to-bumble-bees/ 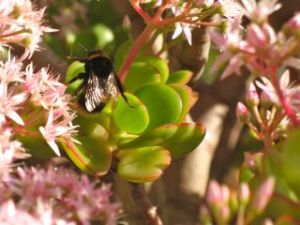 But last year there wasn’t a single one to be found, and I feared that the bumble bees were disappearing from New Zealand as well. See
http://www.julietbatten.co.nz/where-are-the-bumblebees/
Today a lone bee buzzed in. It clambered clumsily over the flowers and leaves, and made quite a contrast with the elegance of the monarch. 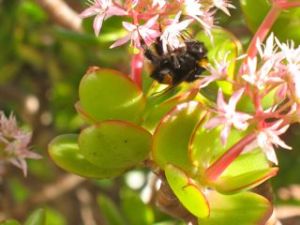 It – well, it bumbled around. This bee is well-named., as it was In Thomas Hardy’s Dorset where they were called dumbledores by the farm workers.

At winter solstice, although I know that the sun has begun its return journey, I don’t always feel it. But today was warm, and with these hopeful visitors, I can believe that the return to summer has begun.

P.S. On the news I heard that short-haired bumble bees have now been sent from Sweden (50 Queens) to England, where they haven’t been sighted for 24 years. In Kent they are planting bee-friendly plants such as clovers and vetches, in readiness. I hope the bumble bees survive. I feel great affection for their bumbling ways.