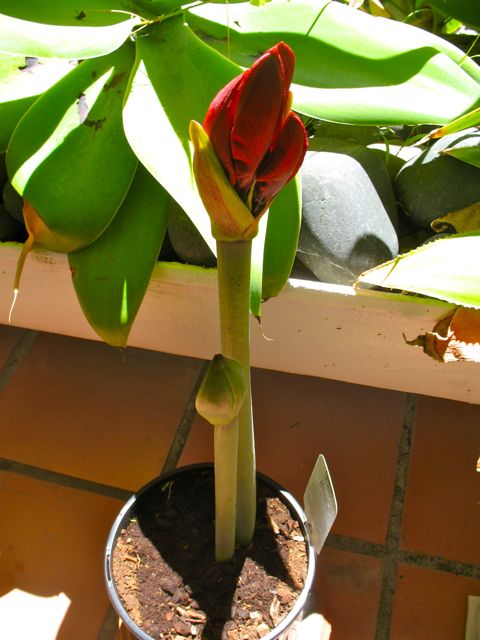 At the beginning of November it was the first anniversary of the death of my dear mother-in-law, Elizabeth. She was 95 and we had been friends for over 40 years.
When there has been a big loss, I always like to plant something. As the plant unfolds, so do my memories.
I don’t have a garden any more, but on the day of the anniversary I spotted this amaryllis in a shop, and bought it to bring home. I liked the promise held in that passionate bud, and the presence of the smaller one lower down. 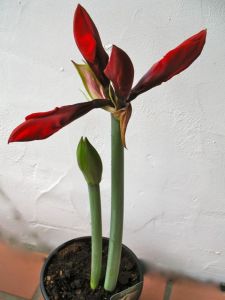 At first the petals looked liked propeller blades, ready to fly away. Elizabeth was a great traveller. She flew, bussed, drove and rode in trains all over the world. When she came to New Zealand she travelled overland through the middle east as war was breaking out all around. She was diverted by a stay in Hong Kong for a year or two, where she taught English. 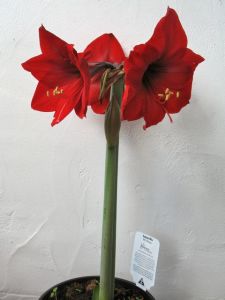 Her entry visa to New Zealand expired because she had taken so long getting here and had been out of reach of communications on her overland journey. So she went to Australia where a fellow-traveller had a little cottage on her land, and there she stayed until she became an Australian citizen. This gave her free entry to New Zealand, 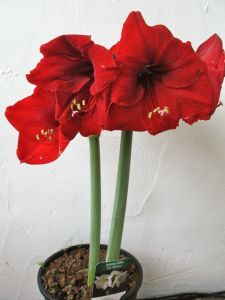 where she arrived at the age of 70 and set up house in the Bay of Islands. Her home was full of exotic objects collected from her travels over the years.
As both buds on the Amaryllis have been spreading their vibrant petals over the last few weeks, Elizabeth has been in my thoughts,

and with these flowers I celebrate her adventurous life.