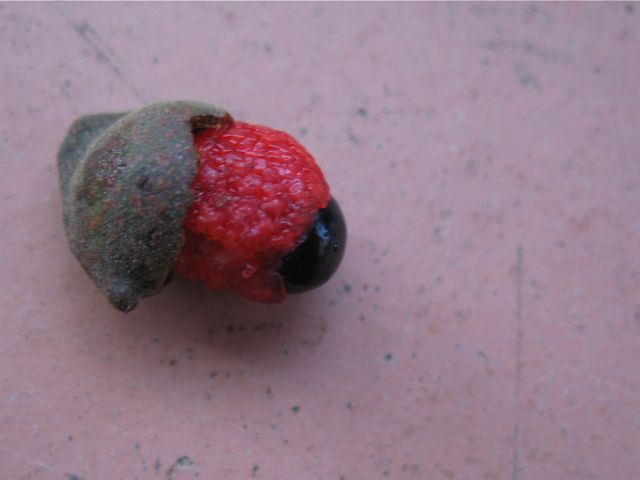 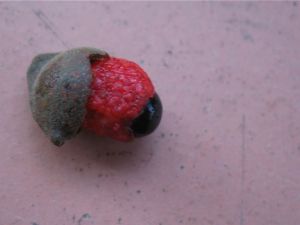 I’ve been wanting to find one ever since I first saw it in a book on native trees – that was about 40 years ago. I even planted a tree, but it never fruited, maybe because it needed to be a female.

It’s a titoki berry. And today I found my first one ever. There it was on the pavement, like a lucious little strawberry inside an acorn-like cup. It looked good enough to eat, but evidently they don’t taste fantastic, even though Maori children used to eat them.

There’s one, up in the tree, hidden inside the brown seed cases. You would never know they were there, except that I happened to spot some red stains on the pavement, and then found the one intact berry.

It’s the little black seed inside the enticing red flesh that was of value to Maori, for the seed contains the finest oil they knew. It was quite a business extracting it, involving mashing up the fruit and washing away the flesh, then pounding the seeds and placing them inside a long, tough kete – flax basket. With a stick at either end, two people could then wind the basket in opposite directions to squeeze out the oil.
It was used in perfumes, and as a much prized hair oil. 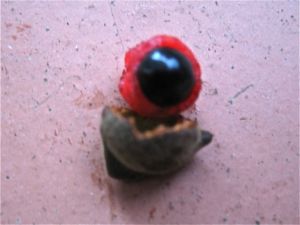 The amazing thing is that the fruit-bearing titoki tree is next door to where I now live. I could so easily have missed it, but I’m learning to watch out for things as I take my walks, and keeping this blog is honing my powers of observation.
The titoki doesn’t fruit every year; in fact there’s a proverb that says a tree bears fruit kia puta tana hiahia —when it wants to. So both the titoki and me had to be ready to find each other.
I’m so happy to have found this beautiful, lush little gem!