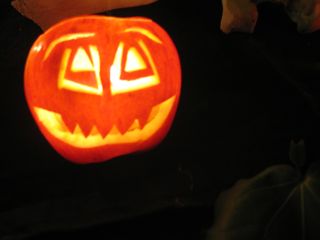 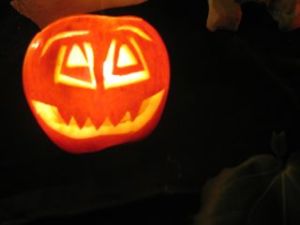 It was the young people who made Kiwi Halloween special this year. They were so inventive with their carving of apples, kumara and pumpkins, and it was touching to see their cards written beside the lanterns and candles. Often it was grandparents whom they were remembering. 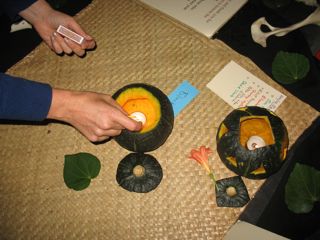 There was a special area for those who had died over the last year.  This woman is remembering her mother. 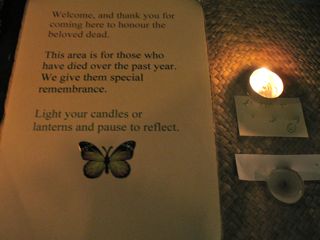 I had seven people on my list, their ages ranging from 17 to 95. 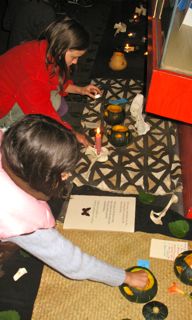 Three eleven-year-olds came along and lit the pumpkin lanterns they had carved during the day. They sat and watched the flames burning, after writing cards for those who have died. 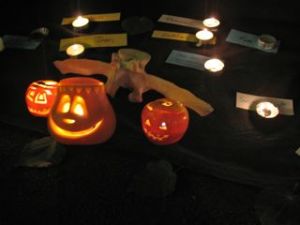 Halloween developed out of the ancient Celtic festival of Samhain, the Day of the Dead. The lanterns looked eerie in the darkness, and yet somehow friendly too. 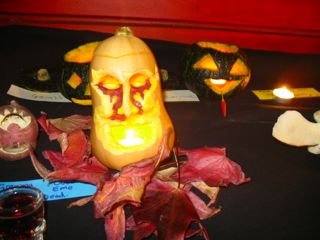 A young man carved a butternut pumpkin and then painted around the eyes, to look like the tree gods he’d seen in a TV programme. He brought autumn leaves to scatter all around. 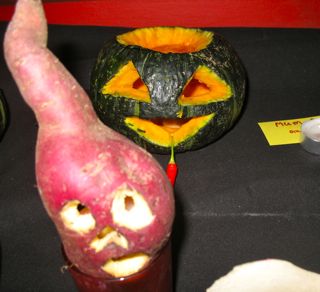 He even carved a kumara. It reminds me of a cheeky pixie. People lingered on the street and nearby benches. Once again, it was a warm vigil, filled with love for all those dear ones who have passed over. This is the true Halloween. By holding this event each year, and linking with people all over NZ who are commemorating it, I hope to restore the resonance with the old festivals. 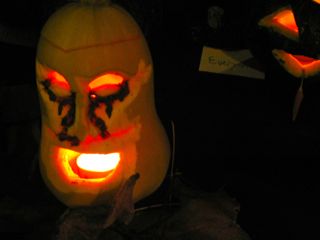 I heard on the radio about a man who has reduced the amount of fizzy drink consumption in poorer areas, not by protesting, but by creating an alternative. He’s supplied houses with free water coolers. The kids think it’s so ‘cool’ to drink from these, and their friends come round for drinks. Fizzy drink consumption has plummetted, and water consumption gone right up.
This is the principle behind Kiwi Halloween: creating a positive alternative, that people love so much they naturally want to do it each year as autumn deepens and pumpkins, apples and kumara have been harvested.