Getting close to bumble bees 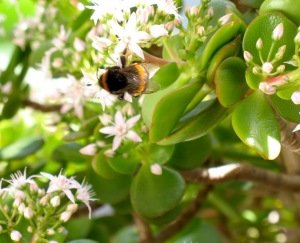 My jade plant is flowering, putting forth a dome of pink stars.  Bumble bees love it. I’m feeling close to bumble bees since hearing about the short-haired bumble bee which is now extinct in the United Kingdom. This subspecies was brought to New Zealand in a box of mixed bees 100 years ago and still survives in the McKenzie Country of the South Island.
Scientists thought they would breed some to send back to England, but alas, the bees all died in hibernation. What happened?
It seems that at the end of autumn,  the bees usually die off, all except for some queens that have mated and find a safe nest for wintering over. The scientists bred some new queens, and tried to simulate the wintering process. However, because the bees were needed in the UK at a particular time, to match the northern hemisphere seasons, the scientists sped up the process. They put the bees through an accelerated autumn (by cooling down the temperature surrounding the nest) so the bees could begin hibernation in time for their great O.E. [for non-Kiwis, this stands for Overseas Experience]
It didn’t work. Bees, like humans, have their own sense of timing it seems.
The original bees travelled here by ship, nestling down in their box in deep slumber while the months ticked by. Maybe that’s how they want to go home, after 100 years in a new land. I hope they make it, because they’re needed there. I’m told that certain plants are best pollinated by these fat, furry bumbles.