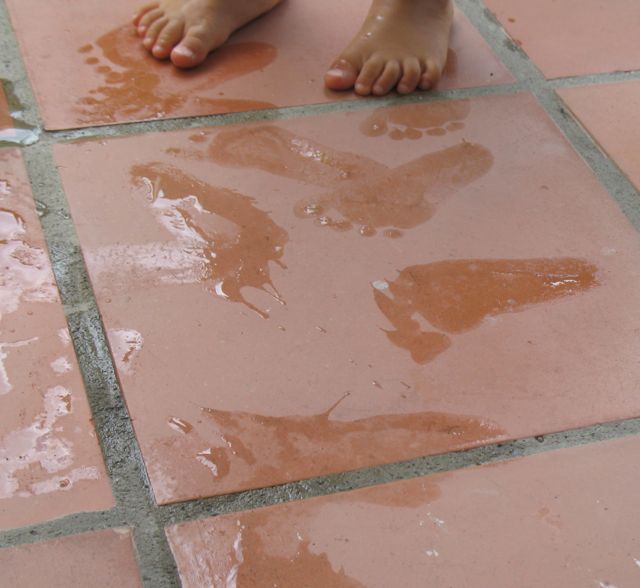 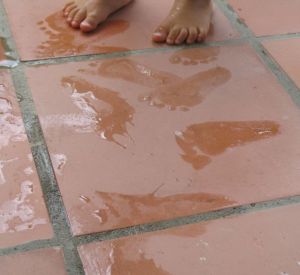 ‘Tepscams,’ said Mira, ‘make tepscams’. It took a while to figure this one out. I had to backtrack in my mind to the spill that occurred when she was watering my pot plants on the balcony. Then I got it: ‘Oh, footprints! You want to make footprints.’ Her face lit up.  ‘Yes, tepscams’.

And so I filled up the little watering can again and watched. First she poured water over the tiles. She stomped in the puddle; then on the tiles, making her mark with great glee. Over and over, more and more footprints.

I thought what a universal urge this is, to make a mark. Summer, of course, is footprint season. We throw off our shoes and roam down the beach, leaving trails of significance unravelling behind us. Trackers learn to discern the age, weight and type of an animal by the marks they leave. Our footprints are laden with information about whether we ran or walked, ambled or strode, moved heavily or with lightness.

On my kitchen wall I’ve stuck a photo taken by my friend Anne, of her right footprint next to mine. It’s easy to see which is which. I like the photo: it speaks of our friendship over fifty years and the many trails we have trod since our school days. And now Anne has just sent me a book of poems written by a friend, with one of her photos on the cover. It’s a photo of footprints. Mine. I don’t know when she took the photo, but as I look at my own imprint in such an unexpected place, I wonder about who I was back then, and how my prints might have changed.

Film stars, when they reach the peak of their fame, place their footprints into concrete in the hall of fame: frozen identity, immortalised. The sun was shining as Mira made her wet marks on the paving tiles. By the time she came inside for lunch her prints were gone.