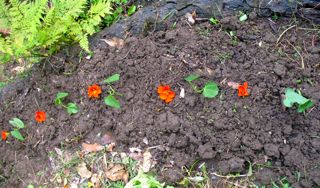 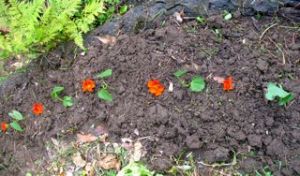 I got them in just in time. Six bean plants for the coming summer. 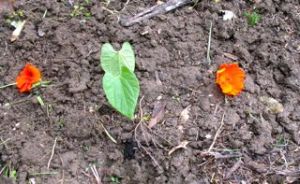 and just for fun I popped nasturtium flowers on the ground between them, not exactly companion planting perhaps, more like companionable planting, to cheer up the beans. Because the weather was changing. At exactly 11.30 am that day, the storm hit the bach with a great wham! Water cascaded down the walls, and when I opened the door, a waterfall rushed inside. I shut it fast. The wind picked up the bach in its giant hand and shook it hard. It tore leaves from the trees, then twigs, then branches. Then it turned to the power lines.

And just on 6 pm, as I was preparing to cook dinner, the lights went out. And stayed out all night, and all of the next day. At times like this the wood fire is my favourite thing in all the world. The gleam you can see in the top of the picture is the kettle, which eventually warmed up enough for a hot water bottle, and on the right is a small pan in which I was able to – well not exactly heat, but let’s say, take the chill off some leftovers from the fridge. 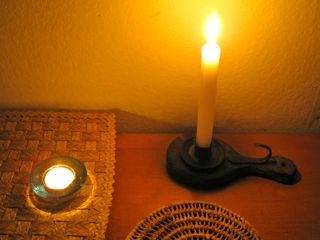 With candles lit everywhere, and the fire radiating its warmth, I was cosy. I’d come out to the bach, fleeing modern technology with all of its problems, seeking a world that drifts back in time, and that’s exactly what I got. With candles, and a torch, I was able to continue my absorption in ‘The Hare with Amber Eyes’. No music except the sound of the wind. No company except the rain drumming on the roof. No phone, because the line went down an hour later. Life was basic, and simple again. I slept deeply and peacefully. I found what I was looking for.

‘Better to light a single candle than to curse the darkness.‘ (old saying)