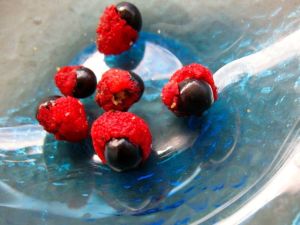 Every season has its own special fruits. My eye was caught by these bright little berries, on the pavement by the library. They are titoki, and I posted about them the year I saw them for the first time. Titoki is one of our native trees, also known as NZ oak. This is what I say about titoki in my book, Celebrating the Southern Seasons:
‘Its juicy, red pulp was sometimes eaten by the Maori in times past, but it was the large, shiny, black seed inside that they valued most, for this yielded oil that could be used medicinally. The seed capsules were placed into flax kits and then pounded with a club to crush them, then the bags were wrung out and the greenish-coloured oil collected. . . It was used to make a salve or massage oil for babies or breast-feeding women to ease chafing.’

Then at my tai chi class, we were all given mandarins, feijoas and fresh garden chives to take away with us. My tai chi teacher and his wife give a lot to their community, and in turn are given surplus fruit and veges, which they then share with us. Food tasted especially good when it’s freely given.

Apples are abundant in this season, in many varieties. And of course, persimmons, my favourite autumn fruit. I’m about to eat some more, so had to be quick with the photo! 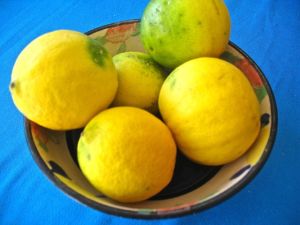 And lemons, which are fruiting in the lemon grove just below my balcony, and sending up a tangy scent.
‘Season of mists and mellow fruitfulness’ — so far, we haven’t had a lot of mist here in Auckland; more like lots of rain and thunderstorms. But fruitfulness there is in abundance, and it sets me thinking with gratitude on all the fruitfulness in my own life, including the return of the muse. I was weary with the effort of producing my latest book, and needed to take a rest. But now the muse is back, dancing with me, and I’m delighting in the richness I see all around. May the muse dance with you too!